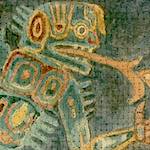 Something which is mentioned in the Russian version of the novel, but not in the Dutch, English or French translations, is the story told by the master to Ivan in the hospital about his «friend» Aloisi Mogarych. In the Dutch, French and English translations we get acquainted to Mogarych when the master and Margarita are reunited, and Margarita wishes to be together again with her lover in the basement, where Mogarych had moved into. The Russian reader already knows that Mogarych is a schemer who had pushed himself as a friend to the master - and who knew quite a lot about the internal deliberations of the editorial board which had to decide on the possible publication of the master's novel. In the description of the conversation between the master and Ivan is written in English: «Joyless autumn days set in, the guest went on». But the original version is different from the translations after the word «on». Which follows in Russian is a description of 420 words of the friendship between the master and Mogarych, and the disdain that Margarita felt towards this «obnoxious person». A qualification which the English reader doesn't know when reading that Margarita «sank her nails into Aloisy Mogarych's face» in chapter 24.

Only in 1989, literature expert Lidya Markovna Yanovskaya (1926-2011) could publish a version based on all available manuscripts. In 1990, her version was used for a publication in Moscow in a series of Collected works, and this text is still used by most publishers and translators as the final basic text.
Reakce na Šnek, 5.8 2020 0:27 | Vlákno